A little background before we start:  I have enjoyed shooting and firearms since about the age of 5.  I am an Eagle Scout and a native of the state of Indiana, which is a fairly politically conservative place.  I am also a 7 years-and-change US Army Veteran with minimal combat experience.  I never fired my weapon in anger nor took direct fire while deployed to Iraq as an active-duty augmentee to the 42nd Infantry Division.  I also held an Indiana License To Carry Handgun (LTCH) for 4 years while I was still a resident and never fired a shot in anger nor took direct fire while state-side.  Never been in a gunfight, have no wish to be.  However, if the time comes that I find myself in one, I’d like to have more in my hand than….well, you get the idea.

For those who are not aware, H.R. 822, the National Right to Carry Reciprocity Act of 2011 will soon be up for debate and discussion in the House of Representatives.  In a nutshell, this bill would allow a Carry Concealed Weapon permit holder to carry in any state that allows concealed carry.  Why can’t a permit holder already do so?  Because there is no federal agency issuing permits to citizens.  It is up to the individual states to issue permits, and each state has it’s own requirements for issuance, although some are common across the board.  Examples:  Indiana will issue a permit so long as you are not a felon and can legally own a handgun.  Florida will issue a permit so long as you are not a felon, can legally own a handgun, and have attended some form of training (military service counts, as it does for many states).  Missouri has the same requirements as Florida, but you must attend a specific state-approved training course, your military service does not count.  These states are known as “Shall Issue” states, as in “provided you meet the requirements, the state shall issue you a permit”.  Then you have “May Issue” states, as in “even if you meet the requirement, the state may or may not issue you a permit depending on the whims of the issuing agency”.  Then there’s Illinois, the lone “No Issue” state, which is fairly self-explanatory.  So since different states have different requirements, they tend to have reciprocal agreements with each other.  “Hey, you recognize our permit and we’ll recognize yours.”  Some states recognize all permits (Indiana), some recognize only those that recognize theirs (Pennsylvania), and some don’t recognize any permit but their own (Maryland).

Confused yet?  Yeah, you and millions of permit holders.  Especially when state legislators decide to change the laws…which happens with the frequency of a cheap ham radio.  Fortunately, there are a number of good resources out there to help.  Google “carry laws by state” and your first three hits will be Handgunlaw.us, the NRA’s Institute for Legal Action, and USACarry.com.  All three are excellent resources that are frequently updated to reflect the current laws.  To prevent further confusion, I’ll leave out “open carry”, “Constitutional carry”, and varying definitions of “concealed carry”.  The aforementioned sites are better organized than my brain is.

Some may say, “If you know you can’t carry in a particular state, don’t carry,” and that’s a valid point.  If I’m flying to…say Maryland, I’m not packing a firearm.  Besides the obvious concern of someone stealing my firearm (not that the fine folks at the airport would do such a thing), there isn’t much point in taking it with me, impromptu range trips aside.  However, if I’m driving from Maryland (where I was stationed for most of my Army career) to visit my folks in Indiana (where I held a permit), it became a pain.  I left my apartment in Maryland with my firearm unloaded and locked in a case in accordance with the Firearm Owners Protection Act.  Once I crossed into Pennsylvania, I pulled over at the first rest stop to load and holster.  At the last rest stop in PA, I had to pull over to unload and re-lock as Ohio does not recognize Indiana’s permit.  Once in Indiana, repeat the load and holster process.  It gets old pretty fast and serves as a healthy reminder that you’re not as free as you think.  Why carry then?  Well, I prefer to drive rather than fly.  The convenience of having my own vehicle, avoiding the irritants associated with flying (that’s a whole ‘nother post), and just the plain enjoyment of taking a road trip.  However, my time in the Army made me one of those “drive straight through” folks.  Go to sleep after work, wake up around midnight, load up, and GO.  Personal time is limited, make the most of it.  Driving by myself late at night, I prefer to have a little friend with me.  Ever had to stop for gas in the middle of nowhere at 2am?  I don’t care if you’re Chuck Norris, that little friend can be comforting.  Especially when you are somewhere off the West Virginia Turnpike because you didn’t stop for gas in Charleston and you’re not sure you can make it Beckley (Pro tip: you will not have cell phone coverage there so 911 is out of the question).  So for folks like me, this bill could be a godsend, right?  No more of these un-holster and lock shenanigans (with the exception of the Democratic People’s Republic of Illinois).  No more being unable to defend my family and myself in a may-issue state (strangely enough, those are the states where I feel the LEAST safe even though there are less legally-carried firearms).

This bill is good and bad in my opinion.  Good because it’s rare to see a pro-2A bill actually get debated in Congress.  Bad because I do not trust the federal government to leave this at “If you have an Indiana permit, Maryland must recognize it and allow you to carry”.  The federal government, in it’s dubious wisdom, will set forth their own requirements for issuance of a permit.  It’s not a question of “if”, it’s a question of “when”.  While municipal, county, and state law enforcement agencies are normally the issuing agencies for permits, I fear that the FBI won’t be the issuing agency for a national permit.  Instead, it would the BATFE, and “Operation Fast and Furious” has demonstrated how well they handle firearms issues lately.  Even if the FBI is the issuing agency, national permits would still fall under the jurisdiction of Attorney General Eric Holder.  Now, while I’m sure AG Holder is a fine husband and father who wishes to protect his family to the best of his ability, he has demonstrated a willingness to deprive me of the same ability (Holder Revives Talk Of An Assault Weapons Ban).  Considering that I spent 7+ years of my life achieving and maintaining proficiency with the use of an M-16A2 assault rifle, that is the particular platform (AR-15 for those playing the home game) I am most comfortable with when it comes to defending my family and home (No, I’m not saying I want to carry an AR-15 on the street.  Well, I do, but I’d also mount a Browning M2 on my Jeep if I could get away with it).  Consequently, I find any talk of a ban on “these evil black rifles” to be a direct action against my ability to do so.  But, hey, that’s probably just a conspiracy dreamed up by a bitter white Veteran.  I’m sure if I mentioned that limiting ownership and carry of firearms was once a tactic used to repress blacks in the South prior to the Civil Rights Act, someone would claim I’m race-baiting.  But I digress…

Side note: Yes, I am well aware that I’m going to end up like Clint Eastwood in Gran Torino when I get older. 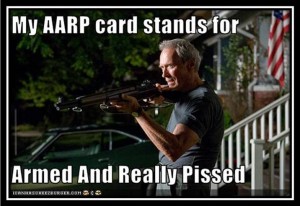 I’m unsurprisingly comfortable with this.

The point is that I don’t believe AG Holder would have my best interests at heart.  Instead I worry that an attempt to nationalize “shall-issue” would end up as a nation-wide “may-issue” law (remember the explanation above).

Additionally, while I’d love to receive my Missouri CCW and not have to unholster on a cross-country trip (again, excepting the DPRI), this bill seems unconstitutional from the start as it infringes upon states’ rights.  While we have a seemingly pro-2A majority in the SCOTUS (see the District of Columbia v. Heller and McDonald_v._Chicago decisions), the Court is one vote away from reversing its position.  Also, while this bill is pro-2A, I don’t see Justice Scalia allowing it as he’s an originalist when it comes to the Constitution.  Assuming Justices Breyer, Ginsburg, Kagan, and Sotomayor vote as one would expect, you would have a 5-4 majority against this bill.

Short answer, I’m conflicted but ultimately against it.

This entry was posted in Shooting, Soapbox. Bookmark the permalink.

This site uses Akismet to reduce spam. Learn how your comment data is processed.