One Nation….Divided by whatever catches our attention.

This is part one of two.  The second half will most likely involve ranting and unsubstantiated opinions.  You know, what most people turn on their televisions to watch and then go on Facebook to bitch about.  Yes, I recognize the irony here.

So…….what’s the complaint today?  No, really, I’m asking you, American public, what is your bitch du jour?  I mean, yesterday was Rolling Stone daring to put a wannabe terrorista on their cover (Hey look!  A magazine that gives the most banal reviews known to man is desperately trying to generate controversy to boost their sales….which have been slumping since the dawn of the Internet!).  Last week it was George Zimmerman getting off.  So what are you pissing and moaning about today?  What’s that?  President Obama dared to voice his opinion about a court case that had racial undertones?  Well, how dare he?!  Imagine….the President of the United States exercising his First Amendment Rights as a citizen of this Nation!

(If you’re frothing at the mouth about “Obama is a citizen”, just click on that X in the upper right corner.  That is a sad and tired argument.  It’s over, it’s not going to change, deal with reality.)

Actually, if you take the time to read what the President had to say AND you’re a rational person (the second part is key…as George Clinton once said, “Free your mind and your ass will follow”), you’ll find that he did his damndest to interject some sanity into the debate….on the topic of racism.  Admittedly, there was a fair amount of politicking in those remarks.  He’s a politician, I expect it.  Just as I expect a dog to sniff crotches and asses.  It’s inherent in the species (and I do view politicians as a sub-species of human).  Racism is not going to be solved by whites saying “well, they’re killing each other more than we’re killing them”.  Nor will it be solved by blacks saying “this is all the result of 400 years of oppression”.  Keep playing the victim or the disinterested bystander and nothing changes.  Change is a two-way street.  I’ll walk toward you, you walk toward me.  Maybe I have to take an extra step, maybe you do.  Either way, we can meet in the middle, which beats the hell out of standing on opposite ends of the street shouting at each other.  Distance and loud voices don’t improve a damn thing.  All that does is muddy the point both of us are trying to make.

I wasn’t aware that people were flipping their collective shit over the President’s remarks today until my wife brought it to my attention.  News stations were posting the story to their Facebook pages and the comments were flying.  I’m sure this comes as a surprise to exactly no one, probably saw it on your own local station’s Facebook page if you follow them.  But, in the odd event that you didn’t, here’s some outtakes from KMBC 9’s page: 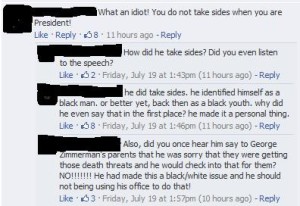 Yes, I’ll admit I cherry-picked these.  But, holy trash, is this where we are?  Granted, I realize that simpletons having a platform is a result of the internet/social media and that means the loudest/most outrageous are the ones we hear the most.  But I can’t go on Facebook, message boards, Twitter, or even YouTube without seeing conspiracy theories of the most ridiculous level.  I have a metric shit-ton of questions for the current Administration regarding their policies and procedures, but I’m not gonna dive head-first into “Erhmahgerd!  Obama’s trying to start a civil war!”.  At this point, I can’t tell if the vitriol is a result of the fact that the President is a Democrat or because of inherent racism.

Black folks, I’m not even gonna attempt to tell you how to get past this ankle-high curb we call racism.  That’s for the likes of Chuck D and George Clinton.  However, white folks, I’m looking at you.  Especially you conservatives.  Why am I targeting you?  Because I’m one of you.  Therefore I can judge you relatively fairly.  I know where you’re coming from, and you might as well sit down and take it.  Hey, you made the mistake of clicking the link, don’t bitch at me.

I’m gonna take a page from Henry Rollins here.  I’m totally stealing his material and I will admit it because it’s a great concept.  Let me tell you about this amazing show I went to years ago.  It was George Clinton and the P-Funk All-Stars at the 9:30 Club in Washington DC.  You know what sticks out in my mind most of all, besides the fact that the Godfather of Interplanetary Funk refused to leave the stage at midnight when club management was trying to close down?  The little girl standing in line in front of us with her mother.  This little light-skinned black girl, who couldn’t have been more than eight years old, excitedly telling anyone who would listen that this was her first concert.  I cannot describe how perfect that was, that her first concert was one where no one was judged by color or creed.  Her first concert was one that was attended by people who were all there for the same reason.  To give up the funk.  Funk knows no color, no creed, no race, no religion.  All funk knows is rhythm and groove.  Funk is about good times and loving your fellow man.  Funk is about getting off your ass to jam.  Not one person walked out of that joint angry.  Not one person was hateful.  The P-Funk dropped the Stomp on us, we bounced like a bunch of hyperactive kids, drinks flew, and no one got pissed off.  We walked out of there reeking of spilled beer, secondhand pot and cigarette smoke, sweat…..we smelled like funk.  And grinning like fools.

The point of that long diatribe is that no matter who you are, if you dig P-Funk, I cannot hate you.  It’s impossible.  Because you know the same joy I do when I listen to them.  Same goes for The Ramones (that’s where I’m ripping off Rollins BTW).  We could be at each other’s throats and you could shout “Twenty twenty twenty four hours ago” in my face.  My only response can be “I wanna be sedated!”.  Zero question in my mind that you are one of my people.  We don’t have to be best friends, but I know I have someone to call if the Ramones magically rise from the dead and start touring again.

Come to think of it, being a zombie is the only way that Joey Ramone could possibly be a weirder-looking cat.  Anyway….

Back to the bitch du jour (kinda like that phrase…and I notice the bourbon is taking effect, but I digress), this is gonna end up coming back to the same place I always come back to: that we as a people are being led by the media, talking heads, politicians, and other various shit-disturbers.  Look, do you go to work and produce something of value on a daily basis?  A valuable service or product?  You get that the groups I named above don’t do that at all, right?  All they produce can easily be replicated in a baby’s diaper.  And they’re they ones who are driving us all against each other.  I’ve pointed out above that it’s ridiculously easy to find something in common with people across the planet.  Music is simply one avenue to do so.  Music that moves you.  I’m not talking sugary bubble-gum pop that gets forced into your ears like a couple of rail spikes.  Hendrix, P-Funk, The Ramones, AC/DC, KISS, Led Zeppelin, Chuck Berry, The Beatles, The Rolling Stones, pick a band.  Hell, there’s a heavy metal band from Iraq.

Music transcends the petty bullshit.  Use it as a tool to bridge the gap between your world and someone else’s world.  Because once you bridge that gap, you’ll find friends and allies.  People who are trying to make it through this thing called life, just the same as you are.  And you’ll see that the same people who are claiming to represent you are just using you to further their own agendas.  That they don’t give a rat’s ass about Trayvon Martin, or any young black man, or the military, or veterans, or immigrants, or American workers, or any number of causes that they spout off about.

I honestly believe we, as a Nation, can get it together.  We have to.  We’re currently up shit creek and no one is looking ahead five years from now to see what’s coming.  We owe it to our children to take the lead and bring it together.  We can do this peacefully, or we can do it the way that 0.45% of us know how to.  Either way, there’s too much bullshit flying around the ether nowadays.  Call out ignorance and stupidity when you see it.  If you don’t, ignorance and stupidity will think it’s okay.

As for you folks who are too damn stubborn to admit that you need to open your mind?  Liberate your mind, motherfuckers.

This entry was posted in General, Soapbox. Bookmark the permalink.

This site uses Akismet to reduce spam. Learn how your comment data is processed.